When Marc Andreessen wrote “Software is eating the World” 10 years ago, ‘the world’ usually refers to ‘all industries’. But it turns out it’s also true in the geographic sense, and Latin America is no exception.

When Marc Andreessen wrote “Software is eating the World” 10 years ago [in 2011], ‘the world’ usually refers to ‘all industries’ (which is true). But it turns out it’s also true in the geographic sense, and Latin America is no exception.

Latin America’s Digital Transformation is well underway. For specific examples, just look at Mexico today and how different it is vs. only 10 years ago where new digital entrants (many of which didn’t even exist) changed the rules of the game: think of the difference in price, selection, convenience, speed of Amazon and Mercado Libre vs. Liverpool, Uber vs. Taxis, Netflix vs. Televisa, Twitter and Facebook vs. newspapers, WhatsApp vs. SMS and phone companies, and so on. Can you imagine going back to that old world? I can’t. And it doesn’t stop there: 10 years ago there was no Conekta, Konfio, Kueski, Clip, Albo, Arcus, all of them companies solving real problems, plus many others that we haven’t heard of.

More interestingly, this Digital Transformation will only keep on accelerating. There is now a critical mass of digital and entrepreneurial infrastructure that has created a tipping point. Again, think of today vs. 10 years ago: everyone now has a smartphone, there are now several (online and offline) payment options, people now spend more time on digital than traditional media, entrepreneurs can access local and foreign VC funds – none of this was really available 10 years ago.

This is to say: A lot has been done, but there’s even more to come. Even better, we can see what’s coming. The US and the UK have traditionally been several years ahead of emerging markets, but Asia has been catching up quickly (and in some cases is ahead, like China with digital payments). Latin America has usually been a few years behind, but at every step, we could always see what would happen next with increased internet penetration (e-commerce, digital media, digital payments, smartphone adoption, and son on). So what comes next (which is another way of saying, ‘what problems haven’t been solved’)? Better, cheaper, and more accessible access to financial services, education, healthcare, day to day purchases, more transparent media – in short, many of the things that are taken for granted in developed economies.

Most of the stories in the local and international press focus on infrastructure, energy, and manufacturing, but underneath the surface there are entire industries being remade thanks to technology, and it has been improving the lives of millions of people. Most people reading this initially are probably  friends from the technology/startup/venture capital world, and will think to themselves: ‘We already know this’. But this is the irony: in certain circles (and for sure the millions of people using digital services every day), everybody knows this, but among mainstream media/traditional investors/government bodies/many international investors and global capital markets, this is not the story that’s being told.

I would even go one step further and argue that the fact that we’re not there yet is actually a good thing: this is the time to invest [‘Buy low’] before everyone else rushes in. Just like 10 years ago Software was eating the world, now Software is eating Latin America: Entire industries are being digitally remade, and this offers the greatest opportunity for growth. So remember: The real growth story in Latin America is Digital Growth.

“All told, listed technology firms make up more than a quarter of the value of America’s stockmarkets. The last time tech companies were so important was back in 2000, when they were briefly worth a third of the value of all listed equities in America.” 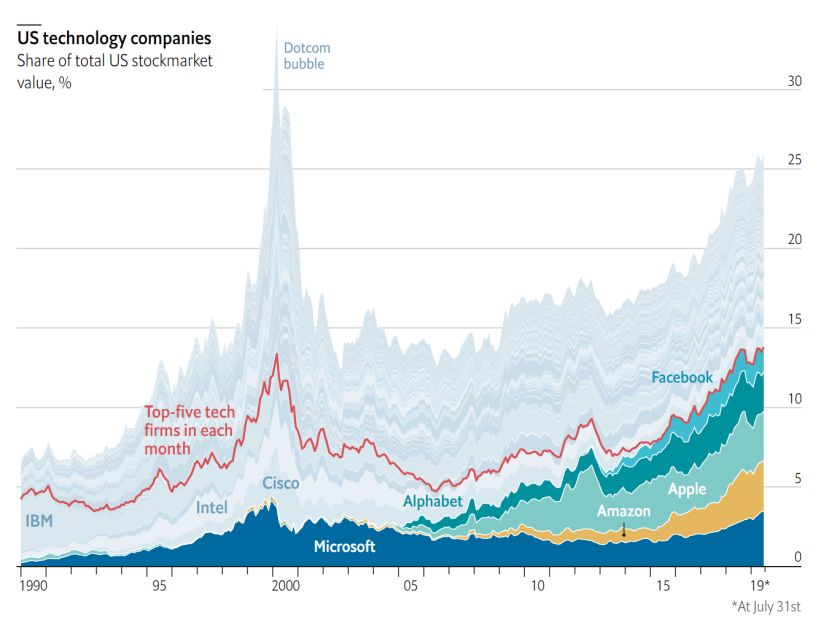 “That is the bad news. The good news is that the economy may be less volatile. A third of America’s 20th-century recessions were caused by industrial slumps or oil-price shocks, according to Goldman Sachs. Today manufacturing is just 11% of GDP and each dollar of output requires a quarter less energy than in 1999.” 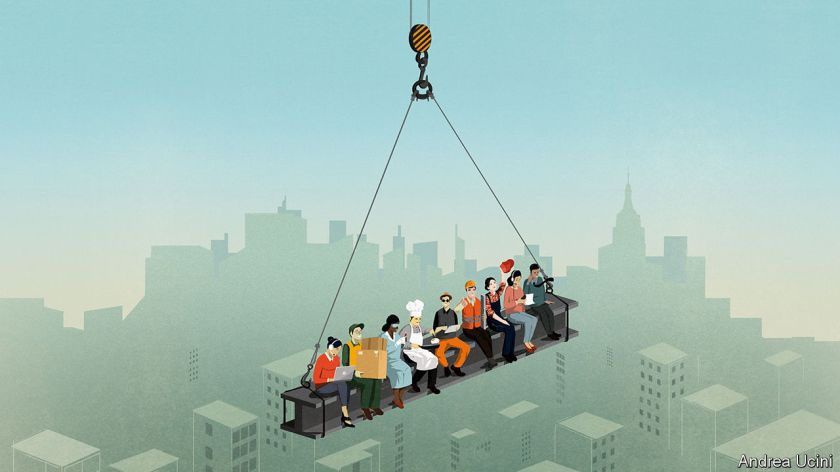 “Services have become even more vital, at 70% of output. Instead of fickle factories and Florida condos, investment has shifted to intellectual property, which now accounts for more than a quarter of the total.”

“On why The Economist always lists solutions in sets of three, a wise colleague once said:

One point? Don’t be political. It is never about just one thing.

Two points? You’ve not thought enough about the problem. Do more research.

Four points or more? Summarise and cut the waffle.

Yup, three points in a list is just about right.”

“Cities prosper not so much because of what they do for businesses, but because they cram together talented people who are fizzing with ideas. Americans in cities with more than 1m people are 50% more productive than those elsewhere.” 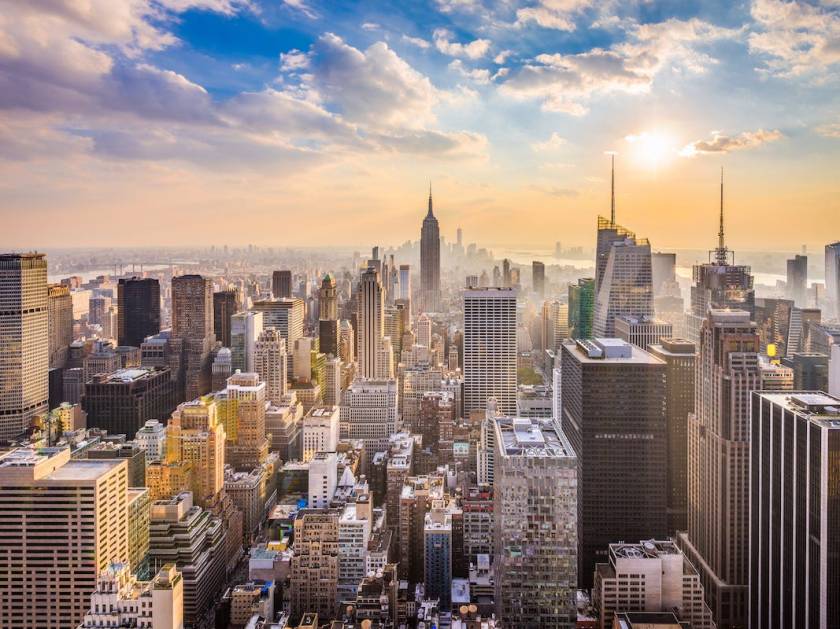 “Cities remain invaluable as places where people can build networks and learn how to collaborate. The brain-workers now logging into Zoom meetings from commuter towns and country cottages can do their jobs because they formed relationships and imbibed cultures in corporate offices. Their heads are still in the city, though their feet are not. Even a socially distanced, half-full office is essential for teaching new hires how a company works. If offices facilitate chit-chat and gossip, they are functioning well. Answering emails can be done from home.”

“Great cities are obnoxious, but they are normally big contributors to national budgets. And the trick they perform for their countries is not just economic. Cities are where people learn to live in a modern, open society. They are machines for creating citizens.”

“Over the long term, the future is decided by optimists. To be an optimist you don’t have to ignore all the many problems we create; you just have to imagine improving our capacity to solve problems.”

Via the great Kevin Kelly https://kk.org/thetechnium/68-bits-of-unsolicited-advice/

“Major disruptions usher in new paradigms, in part to handle problems we never had before (e.g. an entire nation trying to work from home), in part because they break up the status quo such that inertial resistance to the new, the stuff that governs the Technology Adoption Life Cycle, is materially weakened. Ironically, that means coming back from a crisis is actually the best time to introduce wholesale changes. If you do not take advantage of this opportunity, if you simply restart the old engine, not only will you miss the window, you will marginalize your company’s future. The new paradigm will spread, faster than you expected, and by the time you realize you have to catch up, it likely will be too late.”

Technology & Finance entrepreneur and investor with over 20 years of experience as a startup founder, banking executive, and advisor to CEOs and founders. I have helped build organizations from 2 to over 250 people, managed budgets and funding of over 50M dollars, built products with millions of users, and have previously had successful exits. Available for advisory & non-executive roles related to Digital Transformation, Innovation, Venture Capital, launching New Business Units and Emerging Markets.